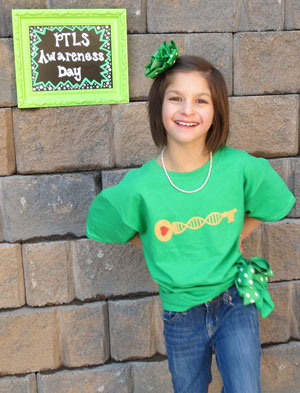 It all began ten years ago, on February 4, 2005,
On a Friday afternoon, in Atlanta, Georgia, Ava Marie Pulley came alive.

Too quiet of an entrance and struggling to breathe and an issue with her heart,
an inability to keep nutrition down, we had some signs from the start.

A longer stay in the hospital, which felt like an eternity,
In reality, it wasn’t very long, before she could join the rest of the Pulleys.

Such an easy baby, most of the time…so happy and content.
Although sleeping more than the average kid and her weight in the negative percent.

Failure to thrive was added as a diagnosis, followed by reflux and soon to be more, and so the start of doctors…. and therapists, galore.

No milestones were met at her nine month check up, so OT and PT we had begun,

Months after this, although much progress was made, genetic testing was done.

“Ava’s done so well in therapy,” said her doctor,
“I’m sure everything will come back fine,”
“But let’s do this testing anyway, it’s what I would do if she were mine.”

Fast forward to the phone call, “Make sure you’re sitting and grab a pen…”
“Your daughter has DUPLICATION 17P11.2 SYNDROME”
that’s what it was known as then.

“It’s a very rare genetic disorder; only twenty cases in the world.
From here on out, you’re captain of the team and you’ll be teaching me about your little girl.”

Wow! A myriad of emotions, a few phone calls and tears, then I went on about my day,
Cause after all, I had just been informed I had a BIG GAME TO PLAY!

and so…
geneticists, gastroenterologists, neurologists….cardiologists…to name a few,
speech, occupational, and physical therapy ,were some of the things that we would do.

A roller coaster ride of emotions, especially in the beginning days,
Just trying to manage and juggle it all,
trying to make our way.

Periods of heartache and grief, longing and pleading , for this to not be the case,
However, ten years later as I sit and reflect, if given the choice,
not much of this would I erase.

Ava is a gift like I’ve never seen, experiencing life in her very own way,
ALWAYS happy and cheery and loving and sweet, each and every day.

They say she’ll max out at a cognitive level, between the ages of 8 and 10….
however, anyone that knows Ava can tell you, she’s funnier than some grown men.

This, to me, takes intellect, above what books and teachers can teach.
Beyond the stars and Heavens, is where Ava is going to reach.

She gives us the chance to appreciate life and celebrate each and every new thing,
From watching her learn to talk and walk, ride a bike, or pumping her legs on a swing.

Things we weren’t sure she’d ever learn how to do…we had to learn to TRUST, have FAITH, wait and see….
Let the plan unfold accordingly and let Ava be who she was going to be.

There’s something special about this kid , for sure, and our
PTLS friends we’ve met along the way,

If you have the chance to meet them, ever, they’ll be sure to make your day!
Their inner glow just shines right through; they’re like angels in every way.

Thanks for listening to Ava’s story….
As we celebrate PTLS Awareness Day!