Genetically speaking, Potocki–Lupski syndrome (PTLS), also known as dup(17)p11.2p11.2 syndrome, trisomy 17p11.2 or duplication 17p11.2 syndrome, is a contiguous gene syndrome involving the microduplication of band 11.2 on the short arm of human chromosome 17 (17p11.2). The duplication was first described as a case study in 1996. In 2000, the first study of the disease was released, and in 2007, enough patients had been gathered to complete a comprehensive study and give it a detailed clinical description. PTLS is named for two researchers involved in the latter phases, Drs. Lorraine Potocki and James R. Lupski of the Baylor College of Medicine.

In short, it is a newly recognized genetic condition with over 1000 persons diagnosed described in the medical literature. Individuals with the genetic condition designated as dup (17) (p11.2p11.2) (OMIM #610883), or dup 17p carry extra genetic information (known as a duplication) on the short arm of chromosome 17. We know that this duplication is predicted to be observed in at least 1 in 20,000 individuals and that patients with PTLS often have low muscle tone, poor feeding, and failure to thrive during infancy. They also present with delayed development of motor and verbal milestones. Many individuals have difficulty with articulation and language processing. In addition, patients may have behavioral characteristics similar to those seen in persons with autism or autism-spectrum disorders. Individuals with PTLS may have heart defects and sleep apnea. The facial features observed in PTLS are subtly similar between individuals but are not usually described as abnormal or striking by physicians. While many parents often question what caused this genetic error, the duplication happens during the formation of the egg or sperm. Parents should take solace in the fact that they could not have done anything to cause or prevent this genetic syndrome. 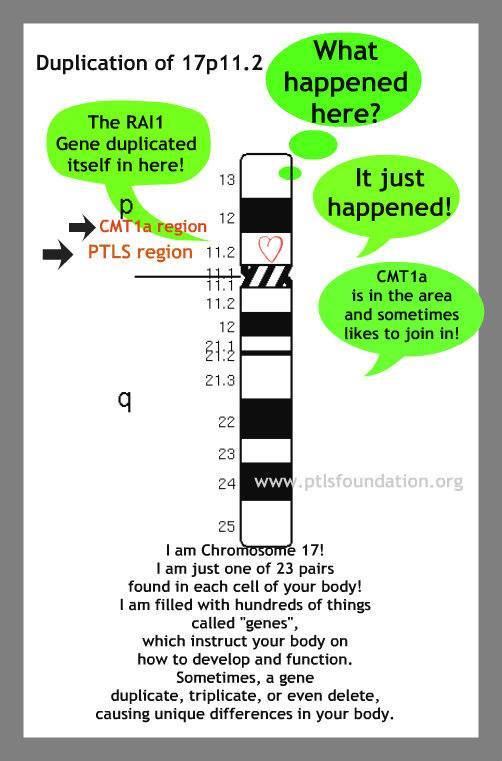 Although PTLS is considered a “chromosomal” disorder, diagnosis is often missed on a routine chromosome analysis. Due to technological advances in cytogenetics, specifically the use of array comparative genomic hybridization (aCGH) for genetic diagnosis, microdeletions and microduplications can be detected with equal fidelity. Hundreds of chromosome segments can be analyzed at one time searching for chromosomal imbalances. We anticipate that many more individuals will be diagnosed with dup 17p11.2 as this testing is performed more routinely in persons with developmental delay, mental retardation, and/or autism spectrum disorder.

While most people with PTLS have a duplication only within the 17p11.2 region, some PTLS patients have a larger duplication that extends to the Charcot-Marie-Tooth (CMT) region of 17p12 and includes the PMP22 gene. The array comparative genomic hybridization test can detect whether or not a person is duplicated for PMP22. An individual with a larger duplication that includes PMP22 will also have CMT type 1A which affects the peripheral nervous system, and is the most common type of CMT. The CMT Association is an excellent resource.

Another website that provides detailed information on PTLS is Online Mendelian Inheritance in Man®:An Online Catalog of Human Genes and Genetic Disorders

Each cell of the body should have 23 pairs of chromosomes (22 numbered chromosomes and one pair of sex chromosomes; XX for females and XY for males) that contain the complete genetic information (genome) for the individual. When the egg and sperm cells are formed, the pairs of chromosomes are separated in a process called meiosis, so that each egg or sperm contains only one copy of each chromosome. Errors that occur during this process can result in genomic imbalances such as missing or extra genetic material. These imbalances can cause genetic syndromes that are associated with a wide variety of clinical outcomes.

Many genetic syndromes that were first described on the basis of clinical findings were later found to be caused by genomic imbalances. New high-resolution laboratory tests—known as chromosomal microarray analysis or CMA can now detect these genomic imbalances even when a particular syndrome is not suspected.

Smith-Magenis syndrome (SMS – OMIM #182290) is caused by a deletion, or loss of genetic material, on one copy of chromosome 17. This well-known syndrome is associated with developmental delay, mental retardation, congenital anomalies such as heart and kidney defects, and neurobehavioral abnormalities such as severe sleep disturbances and self injurious behavior.For every chromosomal deletion, there exists a reciprocal chromosomal duplication. Its reciprocal disease is Smith-Magenis syndrome (SMS), in which the chromosome portion duplicated in PTLS is deleted altogether.
Although the genomic mechanism for the deletion and duplication is the same, the clinical features of individuals are different. These duplication syndromes have their own distinct clinical features and should not be confused with the deletion syndromes.