The  joyous  giggles that burst from this special child are more precious than gold.  The bond he shares with his six-year-old brother — evident by a unique, loving look saved only for him — is magical.  The journey to this point has been difficult, filled with five hospital visits, an endless search for information and assistance, constant worry and fear.  But the journey has taught us so much about life, and what is most important.  Our lives are richer, and we are grateful.  Austin is an incredible gift!  We are hoping his story is helpful.  We look forward to learning from and sharing with other PTLS families as we continue on this journey into the unknown future. 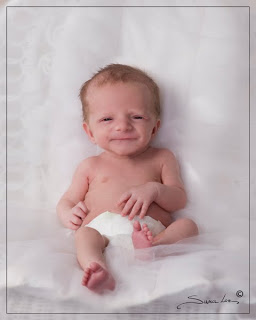 Pregnancy: Why Is My Belly So Small?

During my 20-week appointment, we learned that Austin’s growth was abnormal; his legs were two weeks behind his body in size.  Two weeks later, the legs had caught up, but his overall body size was small.  Between weeks 26 and 36, Austin did not grow much (intra-uterine growth retardation), and people were always commenting on my small belly.  At my 36-week sonogram, he was estimated to be 4lbs 12oz.  The doctor wanted to do an immediate C-section.  Austin was born October 5, 2009.  He was 5lbs 5oz.. , 19 inches, and very, very skinny.His first challenge was combating terrible jaundice, but he responded to light therapy.  He was incredibly sleepy; it was nearly impossible to wake him.  He did not seem to want to eat, and when he did he was exhausted afterward.  He never latched well, which was completely foreign to me since his older brother was such a great eater.  I sought help from many different lactation consultants and tried all kinds of techniques and accessories to help him feed.  This was the beginning of the now well-worn-out phrase in our house, “How much has Austin had to eat today?”

What is Wrong with this Baby? Part 1

We were home from the hospital less than 6 hours when Austin’s lack of interest in eating and intense sleepiness became serious.  He also was cold.  Even wrapped in warm towels from the dryer and held against my chest , he had a  rectal temp of only 94.7 degrees.  Our doctor told us to go to the ER immediately. Austin was in the hospital for 10 days.  In the pediatric ICU, he was unable to maintain a constant body temperature.  On day 4 he miraculously stabilized and they moved him to the general children’s floor.  They ran many tests and asked us many questions, recording all data.  But we never got a definitive diagnosis.  The team of doctors suspected an infection, but because the original spinal tap done in the ER was terribly botched and the small urine and blood samples never grew anything in culture, we never really knew what had happened to our baby.  As he improved in the hospital, he continued to be sleepy and disinterested in eating.  We continued to consult lactation, and I spent endless hours on the breast pump.  We left the hospital still wondering, “What is wrong with this baby?” While hospitalized, Austin showed initial signs of GERD (reflux), which his brother had had as well.  He was put on Zantac.

What is Wrong with this Baby? Part 2

Feeding problems continued, and the Zantac did not work well.  Working with the same GI doctor who had helped our older son, we tried Pepsid and Prevacid.  Neither worked.  Finally we put him on Prilosec (which his brother had been on as a baby), and this helped keep down the little breast milk that I could get into Austin. By week six, Austin seemed to exhibit signs of intense colic, screaming for hours on end.  I had eliminated anything that I thought could be troublesome in my diet.  Yet,  the challenges continued.  His poor latching worsened.  He developed terrible diarrhea.  He was hospitalized for failure to thrive, and again, the doctors ran many more tests.  They still found no answers to what was wrong with our baby. We did discover that he could keep down and digest Alimentum formula.  Our GI doctor encouraged me to stop breastfeeding, since it was causing problems and made it difficult to keep an accurate count of the volume that our little guy consumed.  It crushed me to sever the breastfeeding relationship, particularly because I worried my little sickly guy needed as much immune support as possible.  But when I could see his suffering eased with the formula, I was heartened.  We left the hospital hoping that we now had found the key to our little guy’s growth and development.

Despite the switch to formula, Austin continued to eat very little.  We tried different positioning, feeding timings, bottles, nipples etc.  We consulted speech therapists who specialized in feeding issues.  Our amazing pediatrician kept saying, “what is up with this little guy?”  She referred us to a genetics specialist when Austin was 4 months old.  The geneticist originally thought Austin had Russel Silver Syndrome, a form of dwarfism.  He had many of the characteristics (e.g., hypospadius, a bit of facial asymmetry, slightly curved pinky fingers, low weight-for-height, and feeding problems).  But the genetic tests revealed the answer: Austin was a member of the very special Potocki-Lupski Syndrome (PTLS) family.

Since his diagnosis, Austin has received weekly physical and speech therapy.  He receives bi-monthly therapy through our county’s Infant and Toddler Program.  On our off weeks, I take Austin to private therapists.We have witnessed amazing results and development.  For example, when he started physical therapy, Austin could not find his midline.  He seemed to be unaware of his feet.  His head bent to the side (tortacollis).  Two weeks later he was grabbing and chewing on his toes!  About a month later he could hold his head straight and had good range of motion.  Speech has helped Austin gain confidence with food (he is very protective of his airway because he has choked so many times while eating), helped increase his food intake, and moved his very sensitive gag reflex back further in his mouth. We have worked with Austin’s GI doctor, a nutritionist, and his speech therapists on his diet.  At 10-months old, he is on a 30-calorie-per-ounce mix of Alimentum formula.  He eats about 20-24 oz a day.  He eats a wide range of pureed foods, all of which I make at home.  He consumes about 12-16 oz. of purees a day.  He will gnaw slightly on a graham cracker or biter biscuit.Austin does not at this point exhibit many social or cognitive challenges.  He is a flirt, makes good eye contact, laughs, tries to get others’ attention, and has even acted jealous (fussing) when his brother pays attention to other kids in his daycare.  He started making clear vowel-consonant combinations (mama, baba) at 9 months, but they are limited.  He laughs a lot and goes “ha!” all the time. 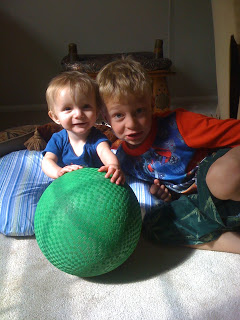 Austin can now sit unsupported for long periods of time.  But his upper body is very weak; he cannot push himself back up when he falls.  He hates tummy time –even when placed on softer surfaces and exercise balls.  He is nowhere near crawling.  He does not roll over. He does not tolerate any texture in his purees, gagging at the littlest chunk.  He cannot suck from a sippy cup.  He hardly ever holds the bottle, and when he does, he cannot tip it. Despite increases in his reflux medication, he continues to throw up.  Often it is very violent — much more than I ever remember his brother experiencing.  His eyes roll back into his head before he vomits, and the food sprays out his nose and mouth.  This is then followed by intense hiccups and screaming.

Austin has been hospitalized on three separate occasions for dehydration associated with stomach viruses.  He suffers from terrible constipation even though he takes two teaspoons of Miralax a day.

Austin Garrison Riddle has taken us on an amazing journey.  We are lucky to have a great care team of doctors and therapists.  We are particularly grateful for our caring and determined pediatrician.  Our family and network of friends have been sources of comfort and support.  Prayer warriors –some we have never met but are friends of our family — sustain us by keeping our family in their prayers.  We are so blessed to have both Austin and his patient, loving, and gentle older brother Kristofer  in our lives.